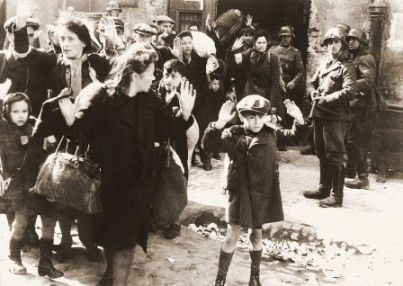 Write on the board: Holocaust – when? who? where? what? why? how?

Ask students, in small groups, to discuss the questions for 10 – 15 minutes, to see how much they know. You could allow them to use phones / tablets to access the internet if you like. Elicit answers and tell them it’s Holocaust Memorial Day on 27th January and that we need to remember the Holocaust so that it never happens again.

Ask learners to read the short text about the Holocaust in this link and try to remember all the important facts. They can have time to discuss in pairs which facts they think are most important.

Then click on the link to the quiz under the article and get the class to do the quiz to check what they remembered. If necessary, they can read the text again, or access the text on their own phones / tablets / computers.

Ask if the class know any films about the Holocaust, and why they think many films have been made about it.

Tell learners they are going to watch 3 film trailers and then write their answers to the 3 questions for each of the films, in pairs. At the end, they will read what the other pairs have written and anyone who has seen the films can decide which version is closest to the truth. (If no-one has seen the films, you could look up summaries online. Alternatively, you could choose to use only one or two of the trailers).

Play the first trailer, then give pairs 10 – 15 minutes to write their answers.
Repeat with the second and third trailer.

Blu-tac all the writing to the board / walls of the classroom. All the learners stand up to read them. They select which is closest to the truth, and you can select some common errors and elicit corrections.

Dictate or display these questions:

Learners, in groups of three, discuss the 3 questions and make a poster to put up on the wall.

This unit was created by Linda Ruas, GISIG Joint-Coordinator.